After being involved with obedience, herding, agility and treibball, Gail found her passion when she started learning Canine Musical Freestyle back in 1999. She has danced with several breeds over the years but Gail’s border collie Pepsi, brought the sport to a whole new level for her.

Pepsi’s love for freestyle was evident to everyone who saw him dance. His happy demeanor with his open smiling mouth and wagging tail, was hard to miss.

Pepsi had a wall full of ribbons and trophies by the time he passed away in February 2014. Gail and Pepsi had Champion titles in both their local club as well as the World Canine Freestyle Organization. They performed on stage at the Bell Performing Arts Centre in Surrey while participating in the play ‘Escape the Darkness’ in 2010 in front of an audience of 1,000 people.

Gail’s, Portuguese Water Dog, Trixie, is beginning her journey into the world of dance. Lacey, an Australian Shepherd puppy, is also learning Freestyle as as well.

Because of Gail’s love for her dogs and her thirst to learn as much as possible about them, she has taken many courses from some of the world’s top canine trainers such as Sylvia Bishop, a many times obedience winner at Crufts, Richard Curtis, many times winner in musical freestyle at Crufts, Michael Pouliot, top musical freestyler and clicker trainer for Guide Dogs for the Blind, to name a few. Gail is a graduate of the Karen Pryor Academy, Puppy Start Right course for instructors. She is also a graduate of the Karen Pryor Academy Canine Musical Freestyle course. Gail is an instructor and judge for the new sport Rally FrEe that compliments learning Canine Musical Freestyle so well.

Gail feels you never stop learning and that the best teachers have been her dogs.

The video below is of Rally Free Elements. It is similar to Rally Obedience but with  more challenging behaviors at each station. I am not teaching this at the present time but if there is a need for it I will  incorporate it into the  Freestyle class. 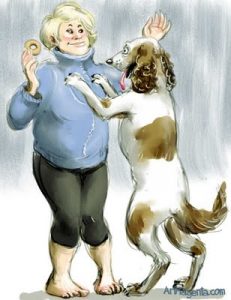